WAIT! Where Are You Going?
Just Five Bucks Gets You My Entire
Law Of Attraction "N.I.C.E." System
(Easily $97 Value)
Do Not Miss Out!
CUSTOM JAVASCRIPT / HTML

(If Video Doesn't Play Automatically, Click The Play Button To
Watch A Special Video From Dr. Steve G. Jones!)
Do You Really Know How to Use the Oldest and Most Powerful Force in the Universe?
Every Living Soul on the Planet is Capable of Unlimited Conscious Creation through the Law of Attraction…
But the Big Question Is... Are You Ready For This Power?
Law of Attraction Master Trainer Reveals His "Secret Weapon" To Unearth the Four Pillars of the LOA, Which Allows Anyone to Gain Extreme Mastery of the Law Of Attraction in Just Days, Instead of Months or Years.
Isn't It Time That You Too Enjoyed the Universe’s Unlimited Abundance With Full Confidence? 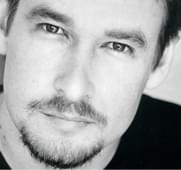 
Have you ever thought of the possibility of consciously creating your physical reality so that it will conform to every desire and dream that you have ever had?
Have you ever wanted to have full control of what’s happening in your life so that worries and stress would just begin to melt away?
If you said yes to any of my questions, you’re in for a very special surprise today. But before that, let me introduce myself.
Happy Customer, Happy Town
My name is Dr. Steve G. Jones, Ed.D. and for over 25 years I have helped thousands of people across the globe achieve their goals and dreams.
In the time that I have been refining my own mastery of hypnosis, I had also been closely studying the Law of Attraction, because it is the central force that holds together the Universe and everything in it.
The Law of Attraction is the oldest and most powerful natural force in the known Universe. It is not just an academic concept; it has existed for billions of years.
And as the human race has also recently discovered, the Law of Attraction is also present in our lives and functions whether we acknowledge its power or not (like gravity). Since it’s a primeval natural force, it is unstoppable…
And this is actually the BEST THING about the Law of Attraction.
The Law of Attraction works on the principle of reflection. Each person sends out specific vibrations energies to the Universe. These energies are then reflected back to the originator (that’s you and me).
The problem is that not many people know what exactly they are transmitting to the Universe.
When you transmit a particular vibrational energy, the Universe responds through the Law of Attraction. The Law of Attraction works in a person’s life through conscious creation. Or sadly in many cases, unconscious creation. This means that 90% of the time, we attract things that we don’t really want for ourselves like sadness, failure, bad relationships, debt, etc.
You can unwittingly attract the wrong things into your life. And you would have to deal with the short term and long term consequences of what you have attracted. The Universe doesn’t know what’s good or bad for people – it just reflects whatever is sent to it.
The Law of Attraction is responsible for making creation possible at all times and regardless of the circumstances.
When I was young, I always thought that we were somehow victims of circumstance and that we really had no control of what was happening in our lives. I believed in this until I noticed something peculiar – some people were somehow able to step out of their old lives to live magnificent new lives filled with happiness and satisfaction.
What was their Secret? Why were they able to do it?
After a time, I discovered the Law of Attraction myself… and my life was never the same again... But unlike other people who just used the same techniques over and over again (sometimes in futility), I realized that there had to be an easier way to use the Law of Attraction.
To many, the Law of Attraction appears to be this large, monolithic tower that has to be conquered before you start seeing any results. It can be this way… If you don’t know how to use the NICE Technique.
The NICE Technique is the revolution in the Law of Attraction. With it, conscious creation is achieved in just 4 easy steps.
You heard me right – it is possible to take advantage of the most powerful natural force in the Universe in just 4 easy steps.
Conscious creation of your dreams, goals and desires will begin to take place immediately after you have succeeded in completing the first step.
Things will begin to fall into place more rapidly as you approach the third and fourth steps… But don’t worry – the NICE Technique is the simplest and most effective way to utilize the Law of Attraction.
No more guesswork, no more hit and miss! Use the NICE Technique every time you need to consciously create something in your life. Need a genuinely rewarding relationship? Use the NICE Technique to attract the love of your life. Need a better job or business? The NICE Technique will help you develop new skills and refine the old ones so your dream becomes possible.
Every desire requires a particular imagining. In the end, the Law of Attraction reflects the sum total of your vibrational energies to make it all possible.
Now, in all the time that I have been closely studying the four pillars of the Law of Attraction, I have been able to develop a special system for anyone who wishes to use the NICE Technique, too. Let me show you what I have in store for you...
Dr. Steve G. Jones, Ed.D.’ 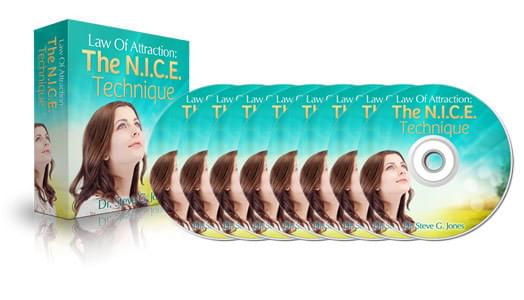 NICE Law Of Attraction:
Finally Master The Law of Attraction In 4 Simple Steps
“NICE Law Of Attraction” is the fastest and easiest way to get great results with the LOA in the shortest possible time. With it, you will be able to consciously create anything that you have ever dreamed of in life. The only limit is your own ability to dream and want things.
I can’t show you everything here, but I can give you an exclusive preview. Take a peek at what’s inside:
Module 1: Introducing the N.I.C.E. Technique
Module 2: Preparing to be NICE
Module 3: Taking Notice
Module 4: How to Intervene
Module 5: Incorporating Change
Module 6: Embracing the New You
Module 7: Times to be NICE In Your Life
Module 8: Sharing the NICE Technique
FREE Bonus 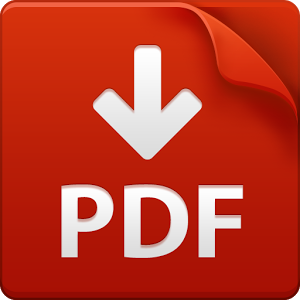 Included as a FREE bonus is a complete transcription of the entire course! This means that in addition to the 8 audio modules, you also get a full transcript of every word as a downloadable PDF. This is easily valued at $19.95 itself but it’s yours FREE!

Complete transcription of the entire course! Yours FREE! 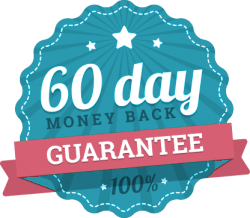 100% Money Back Guarantee...
No Questions Asked!
Even with the LOW investment of $5 today, I still want to take away all the risk.  You have a full 60 days to put my claims to the test.  If you're not happy... FOR ANY REASON... just send an email to support@niceloa.com and you will get an immediate refund... no questions asked!

Only you would have the power to change your life through the LAW OF ATTRACTION. If you want success and even more happiness, it’s time to decide. Click the link above to get the NICE Technique right now!
To Your Success,

P.S. Why spend hours through trial and error if you can get it right the first time? Try the NICE Technique today!
P.P.S. The NICE Technique is simple and works for everyone. No degree in rocket science needed.

P.P.P.S. Transform any area of your life that you want to improve. No boundaries, no limits.